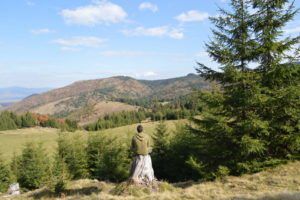 One of the exercises in my book is a meditation to release anger. You probably already know that this is not an easy thing to do. I know for me, when I am angry I think differently than when I am not. I can be driving down the road listening to some good music, feeling great, then somebody cuts me off and I become insane. All of the sudden a human being that I would otherwise have compassion for becomes a total enemy.

Whenever I feel that ugly burn of anger begin to well up in my chest I take a breath. It might not always be right away, but the moment I become aware of it, is when I breathe. For some reason the mere act of slowing down and taking a deep breath changes the direction of the energy flow. Sometimes all it takes is to put some space between the emotion and the logic to regain peace.

In the book I describe a magnificent tree that draws the anger from your spirit. Like most of the other illustrations in the exercises there is a meaning behind the symbol. The tree is a vessel between being aware and being unaware. Anger is usually a manifestation of unawareness to the bigger picture of Truth. Living in a state of constant anger keeps one asleep. By being aware of the anger and knowing that you have the power to let it go you become in control of your own emotions. The tree is the awareness that is already within you and the universe is the bigger part of the whole where the energy is released and transmuted into something worthy.

Anger is an emotion derived from fear. Fear is a primal emotion that automatically springs forth when we feel in danger. Anger seems to be the force needed to shove through the fear in order to eliminate the object that has created the fear. To live in love instead of fear reduces anger greatly. For me it is extremely hard to love everybody. When I became willing to try to love people instead of fear them is when things began to change for me. Not that I was afraid of everybody, but that everybody seemed to be a threat to me. When I started looking at all human beings as people who are merely trying to live their lives and not get over on me I felt a shift in my own consciousness.